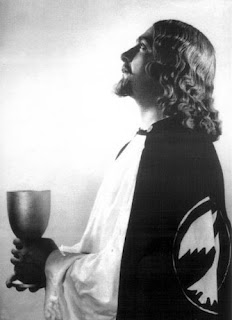 First he studied at the Conservatory of Ljubljana, then completed his education in Vienna. In 1929 he made his debut at the Slovenian National Opera and Ballet Theatre. In 1937 he became the first tenor of the Croatian National Theatre in Zagreb, where he and appeared until the end of his career. Guest appearances brought him successes in Berlin and Dresden, in Prague and Belgrade, later also in Paris (1953) and London. Since 1943 he often appeared as a guest at the Volksoper in Wien, since 1944 also at the Staatsoper in Wien. Since 1958 he was a regular member of this opera house. On 14. 8. 1952 at the Salzburg Festival he sang the role of Midas in the premiere of Richard Strauss’s opera ‘’Die Liebe der Danaë’’. In 1955 he sang at the London Stoll Theater in the English premiere of the opera ‘’Ero s onoga svijeta’’ by J. Gotovac under the direction of the composer. In 1958 he was a guest at the London Covent Opera. Most of his repertoire included heroic roles. He continued his career until the sixties. 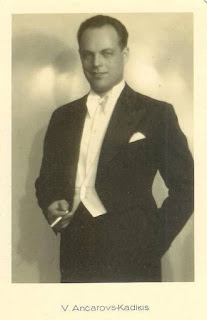 He was a soloist of the Latvian National Opera, Riga. In 1935 he sang in operetta at the Theater an der Wien. In 1940’s he appeared at the opera houses of Hamburg, Munich, Berlin, Hannover, Aachen and Oldenburg.  In addition he his voice was heard on broadcasting stations in Germany.

Posted by Ashot Arakelyan at 5:56 AM No comments: 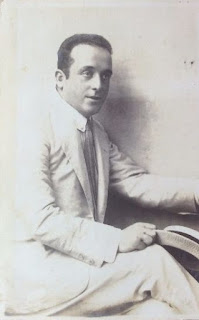 First he studied singing under Unger in Vienna, then from 1909 to 1912 completed his education at the Academy of Music and Theater in Vienna. In the 1912-1913 season he was engaged as the first baritone by the Opera Theater  in Moravian Ostrava. From 1913 to 1914 he appeared at the Aachen City Theater. His repertoire included part from operas of Wagner, Verdi and Mozart. He made guest appearances in Düsseldorf, Cologne, Hamburg, Lübeck, Graz, Prague and Breslav. In the 1914-1918 seasons he was a member of the Croatian National Theatre in Zagreb. Here he participated in opera premieres of G. Puccini’s ‘’La Fanciulla del West’’ and R. Strauss’s ‘’Salome’’. In 1918 he joined to the Slovenian National Opera and Ballet Theatre in Ljubljana and worked here up to 1924. His repertoire included Figaro, Rigoletto, Scarpia in ‘’Tosca’’, Tonia in ‘’Pagliacci’’, Athanaël  in ‘’Thais’’ and many other parts. Since 1924 he started to appear as an actor and his star role was Jago in Shakespeare’s ‘’Otello’’. 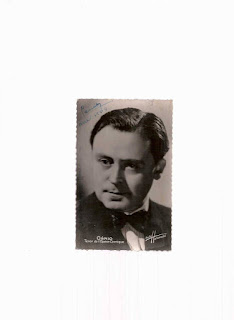 He studied singing at the Conservatoire de Paris under legendary opera singers André Gresse and Thomas Salignac and obtained there a few singing prizes and medals. He made his debut at the Opéra-Comique in ’’le Bon roi Dagobert’’ by Marcel Samuel-Rousseau (1927). His repertoire included Sciarrone in ‘’Tosca’’, Schmidt in ‘’Werther’’, Beppe in ‘’Pagliacci’’, Yamadori in ‘’Madama Butterfly’’, Nathanael/Spalanzani in ‘’les Contes d’Hoffmann’’, Hadji  in ‘’Lakmé‘’, Poet in ‘’Louise’’ etc.

Posted by Ashot Arakelyan at 9:11 PM No comments: 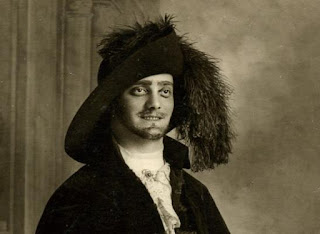 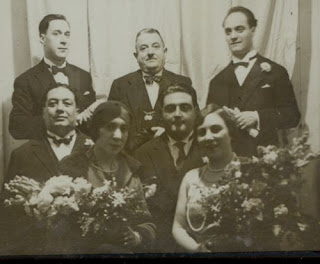 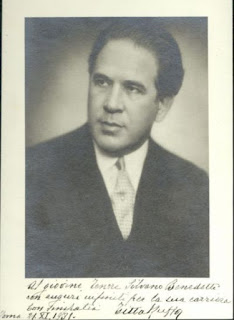 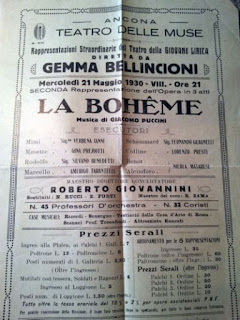 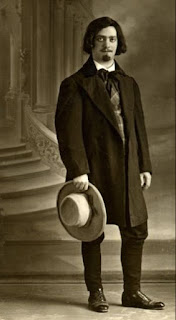 Born Silvano Proietti, son of sculptor Vincenzo Proietti (1876-1945) and Agata Monti (1873-1948), he was baptised at S. Giovanni Laterano and changed his family name into Benedetti in 1928. The reason is still not clear.

There is evidence of public performances already since 1924 in Rome – under the name Silvano Monti (using the surname of his mother, Agata Monti) or even Silvio Monti. In an very early review from “Piccolo Giornale d’Italia”, he appears as “tenore Proietti”.

He took lessons with the famous teacher Giovanni Villa (from Rome). Between 1928-1930 (at least) he participates to the courses of Gemma Bellincioni at the “Teatro Sperimentale Internazionale della Giovane Lirica” in Rome. At some point he had also an interaction with Maestro Giulio Moreschi, tenor, the adoptive son of castrato Alessandro Moreschi.

His career was interrupted in the middle of the 1930s, when it was at its most promising point, due to a sudden neurological loss of hearing – which, seemingly, happened  on stage during a performance of Lucia di Lammermoor. This dramatic event would mark his life forever.

He was a Cavaliere dell’Ordine della Corona d’Italia. After participating as a volunteer to the First World War as an aviator, he was later an ufficiale of Civil Engineering during the Second World War, especially in Albania. During the escape from Albania, he was a prisoner of the German SS in the Lager of Semlin (Belgrad) – being able to return to Italy at the beginning of 1944 hidden in a wagon of cows. By this time his hearing handicap became worse.

After having to give up the musical career, he worked at the Ministero dei Lavori Pubblici in Rome until his death, a work that he started already during his musical career.

His grandson Flavio Ferri-Benedetti (born 1983) is a countertenor.

I would like to thank Flavio Ferri-Benedetti for the information and photos.

Posted by Ashot Arakelyan at 11:40 PM No comments: 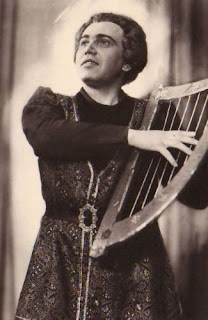 He was one of the best German heldentenors of his time. Originally he was a carpenter. He studied singing under Julius Lenz in Köln and made his debut at the Oper in Köln (1932). His repertoire included  Florestan in ‘’Fidelio’’, Lohengrin, Siegmund in ‘’Walküre’’, Matthias in ‘’Evangelimann’’ of W. Kienzl, Titelrolle in ‘’Der arme Heinrich’’ of H. Pfitzner, Pedro in ‘’Tiefland’’ of E. d'Albert, Bacchus in ‘’Ariadne auf Naxos’’, Herodes in ‘’Salome’’ and Ägisth in ‘’Elektra’’ of R. Strauss, Fabiano in ‘’Der Günstling’’ of R. Wagner-Régeny, Rodolfo in ‘’La Bohème’’, Titelrollen in ‘’ Les contes d'Hoffmann’’ of Offenbach and in ‘’Sly’’ of E. Wolf-Ferrari.

Posted by Ashot Arakelyan at 11:13 PM No comments: 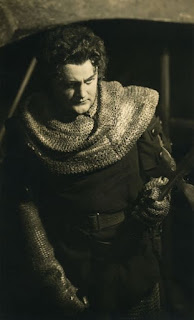 He studied singing under Elisabeth Wolff in München and made his debut in 1939 at the Stadttheater in Graz in R. Strauss’s ‘’Rosenkavalier’’. In the 1941-1945 seasons he was engaged by the Staatsoper in Dresden and joined in 1946 to the Bayerische Staatsoper in München. On 9. 8. 1949 at the Salzburg festival he sang the role of Haemon in the premiere of the opera ‘’Antigonae’’ by Carl Orff. Here he appeared as soloist in G. Rossini’s ‘’Stabat Mater’’ (1949/1962). He returned for the ‘’Schöpfung’’ of J. Haydn (1951), after two years sang also in ‘’Judas Makkabaeus’’ of G. F. Händel. In 1964 he guested in ‘’Christus am Ölberge’’ of L. van Beethoven, in 1967 in W. A. Mozart's ‘’Requiem’’ and took over in 1949 a small part in performances of ‘’Zauberflöte’’. Guest performances led him to the famous opera theaters of Italy, Austria, Belgium, Holland and Switzerland, also to the Scandinavian lands and South America (Teatro Colón, Buenos Aires, 1951). At the Teatro del Maggio Musicale Fiorentino he sang in 1951 the part of Golo in ‘’Genoveva’’ by R. Schumann (the Italian première of this opera). In the 1951-1952 season he appeared in several parts at the Arena di Verona. In 1953 he appeared at the Covent Garden among other things as Apollo in the première there of the opera ‘’Die Liebe der Danaë’’ of R. Strauss. Still in 1976 he performed at the Staatsoper in München in the premiere of the opera ‘’Die Versuchung’’ of  Josef Tal. In 1977 he appeared for the last time in München in ‘’Rosenkavalier’’. His repertoire included Radames in ‘’Aida’’, José in ‘’Carmen’’, Lohengrin, Duke in ‘’Rigoletto’’, Walther von Stolzing in ‘’Meistersingern’’, Alvaro in ‘’La Forza del Destino’’, Pinkertton in ‘’Madaa Butterfly’’and Cavaradossi in ‘’Tosca’’.

Posted by Ashot Arakelyan at 10:28 PM No comments: 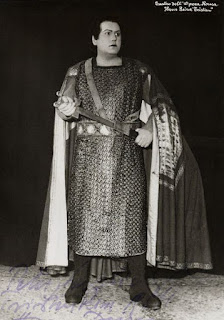 First he studied medicine in Vienna, then vocal at the Vienna Music Academy. He was a pupil of Tino Pattiera and Paul Neuhaus. He made his debut in 1936 at the Landestheater in Linz (Danube) as Hans in B. Smetana's ‘’The Bartered Bride’’. In the 1937-1939 seasons worked at the Stadttheater in Basel and St. Gallen, then, until 1941, he appeared as an operetta singer at the Mellini-Theater in Hannover. During the World War II he sang at the Theater of Nollendorfplatz in Berlin in operetta roles (among other things as Danilo in ‘’Lustigen Witwe’’ and Barinkay in ‘’Zigeunerbaron’’). In 1943 he was engaged by the Städtische Oper (Deutsche Oper) in Berlin, where he made his debut as Nando in ‘’Tiefland’’ of E. d'Albert. He remained connected to this opera house throughout his career. In 1948 he appeared there in the world premiere of the opera ‘’Circe’’ by Werner Egk. Since 1958 he was a member of the Staatsoper in Hamburg. From 1962 to 1987 he performed at the Staatsoper  in Vienna (there took place in 1987 his last appearance as Ägisth in ‘’Elektra’’ by R. Strauss). In the 1950-1951 season he appeared at La Scala as Tannhäuser and Parsifal, the next year in ‘’Die Meistersinger von Nürnberg’’ (under  W. Furtwängler). He sang at this famous opera house also in 1957 as Tristan and again came back in 1967 for Tannhäuser. At the Teatro San Carlo in Naples he performed in the 1949-1950 season in ‘’Wozzeck’’by A. Berg. The role of Walther von Stolzing he sang at the City Center Opera of New York (1950). In 1955, 1957, 1958, in the 1960-1961 season and also in 1968 he guested at the Grand Opéra in Paris and performed in such a parts like Siegfried, Tannhäuser, Otello, Tristan, Erik, Florestan, Samson Siegmund and Tannhäuser.  At the Teatro Comunale in Bologna he was heard in 1957 as Siegfried, at the Teatro Colón in Buenos Aires as Tristan (1963), at the Teatro San Carlo in Lisbon as Samson (1961). He also appeared as a guest in Barcelona, ​​ Lyon (1964/1965), Toulouse (Otello), Brussels (1962-1963) and London (1953). At the Teatro dell'Opera in Rome he guested in 1949 as Parsifal (opposite Maria Callas and Cesare Siepi). Guest performances also took him to the Staatsoper of Munich and Stuttgart, additionally to the Opéra de Marseille and The Royal Danish Opera Housea and also Teatro Carlo Felice in Genoa. In the 1958-1962 seasons he performed at the Bayreuth Festival as Parsifal, Tristan (1959) and Tannhäuser (1961). At the Salzburg Festival of 1951 he made guest appearances in ‘’Wozzeck’’ and ‘’Zauberflöte’’. On 23. 5. 1971 he performed at the Staatsoper in Vienna in the world premiere of the opera ‘’Der Besuch der alten Dame’’ by G. von Einem. In 1972 he sang the role of Alfred in ‘’Fledermaus’’ at the Deutsche Oper in Berlin. At this house he worked over 40 years and became its honorary member. On his 75th birthday in 1986 he sang in Berlin the role of Herod in ‘’Salome’’ by R. Strauss. He was interested in many things and also worked as writer and painter.

Posted by Ashot Arakelyan at 1:48 AM No comments:

He studied singing with Karl Rössl-Majdan and Hans Depter in Vienna. In 1947 he made his debut at the Theater in Graz as Max in ‘’Freischütz’’ by Weber. From 1947 to 1948 he performed at theaters in Switzerland and Hungary. In 1949 he was engaged by the conductor Hermann Abendroth at the Nationaltheater in Weimar. Since 1953 he appeared as Heldentenor at the Opernhaus in Leipzig. At the same time he was a soloist of the Staatsoper in Dresden. One of his greatest successes was in Leipzig, where in 1962 he sang the part of Rienzi. Since 1964 he was a member of the ensemble of the Staatsoper in Berlin. Guest performances have taken him to the opera houses of Frankfurt a.M., Budapest,  Amsterdam. He also appeared in Barcelona, Lisbon, Poland, Finland and Romania as well as in the USA. His repertoire included also Radames in ‘’Aida’’ and Otello.

Posted by Ashot Arakelyan at 11:20 PM No comments: